I’m guessing that many of you Chicagoans have seen this mural on the Holy Covenant United Methodist Church on Diversey and Wilton in Lincoln Park.  In fact, you can see it from the L platform nearby. 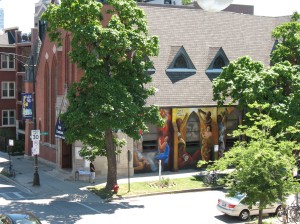 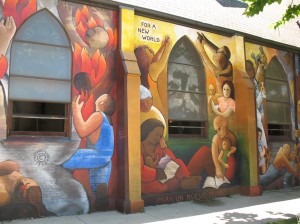 For a New World/Para un Nuevo Mundo was painted by John Pitman Weber and Oscar Martínez in 1973 and restored by Weber and Bernard Williams in 1996.  The mural is divided into 3 sections that correspond to the church’s worship service.

Pain, death and suffering is depicted at the far left.  This is Confession. 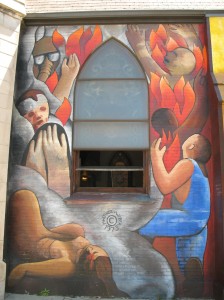 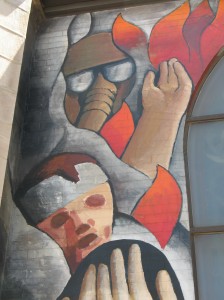 The middle section depicts The Word with images of love, light, and racial harmony. 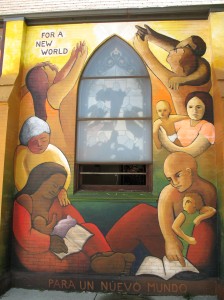 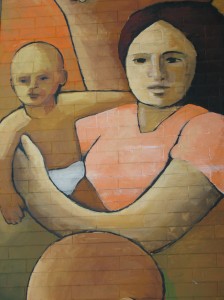 Finally, the right panel depicts daily labor and working for justice as the Offering. 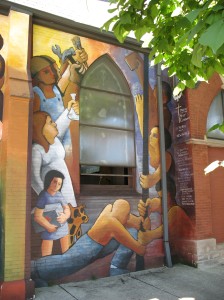 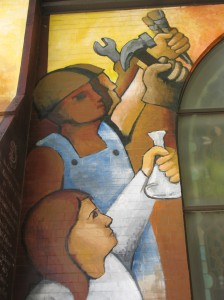 I love the substantial forms and the deep, bold colors in this mural.  It really leaps off the wall…all the way to the L, actually.

Folklore is an Argentine restaurant at Division and Hoyne in Wicker Park with (a) fabulous food and (b) a fabulous mural.  I was really excited to discover the mural on the restaurant’s east wall after dinner with friends.  And I will admit to feeling fancy that I recognized the style as John Pitman Weber’s. 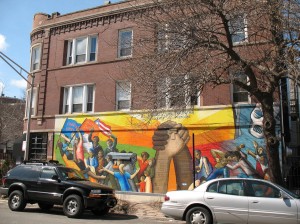 It turns out that Weber painted Unidos Para Triunfar/Together We Overcome in 1971, revised it in 1974, and restored it in 2004.  The center of the mural shows clasped brown and black hands. 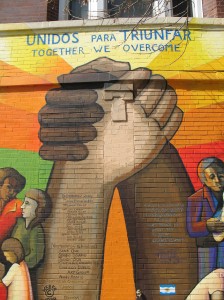 On the right, the mural depicts youth fighting — showing the violent tension among black, Latino and white youth that was  flaring up when the mural was originally painted. 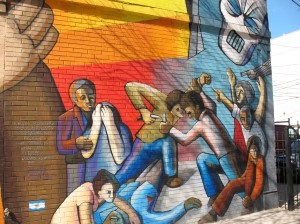 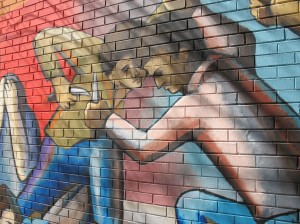 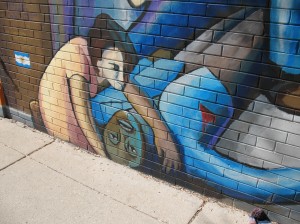 To the right, the mural shows a mix of people participating in a unity march.  The coffin was added as part of the 1974 revision — a reference to the police killing of a Puerto Rican youth in 1973. 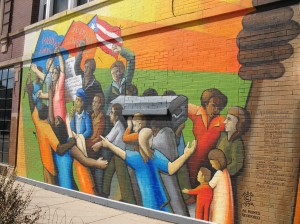 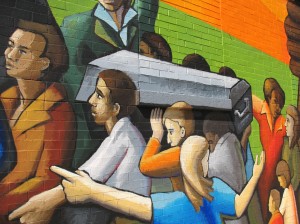 The marchers carry a Puerto Rican flag and signs calling for decent housing, justice, and unity. 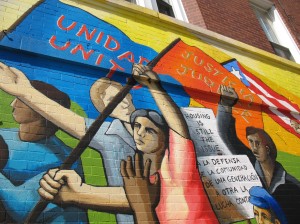 The sign in Spanish reads:  Defense of the community, from one generation to the next.  The struggle continues.

In early May, I went down to Humboldt Park to look for a mural by Hector Duarte that I’d heard about.  I did find that one (more on that later), but I also stumbled across this mural at LeMoyne and Rockwell. 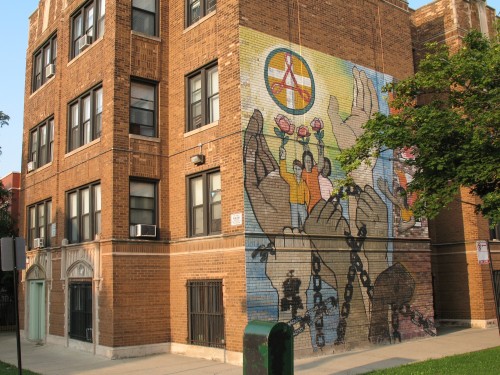 It is titled Rompiendo las Cadenas/Breaking the Chains and shows brown, black and white hands breaking the chains of  racism, injustice and poverty. 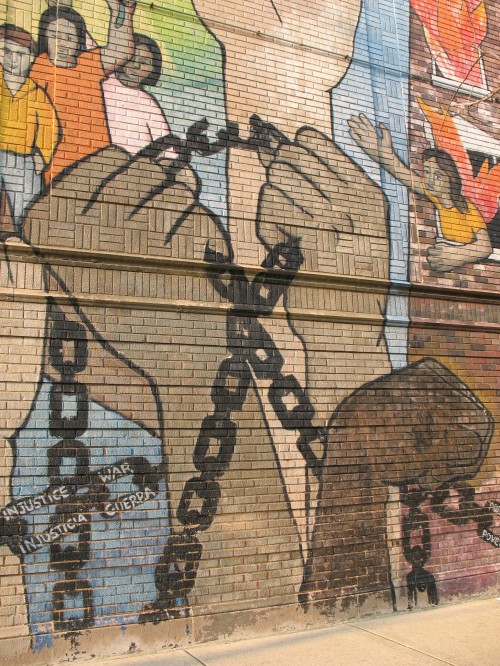 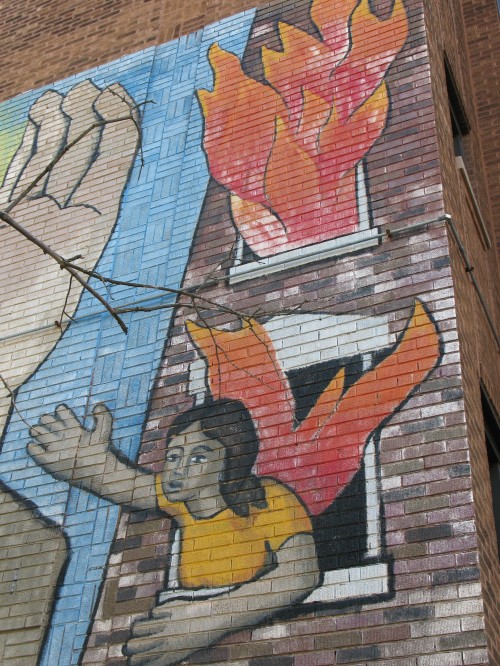 and smiling children hold up roses, seemingly representing the future once the chains are broken. 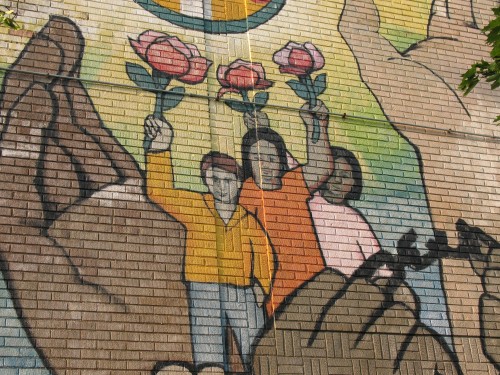 I didn’t really know what to make of  the mural and filed the photos away.  Then, recently, I came across a picture of it in my research — it is thought to be the oldest community mural in the US that exists in its original form!

It turns out that Rompiendo las Cadenas was painted  in 1971 by John Pitman Weber and neighborhood residents.  Weber co-founded the Chicago Mural Group with William Walker in 1970 and continues to be very active in Chicago public art.  He studied at the Art Institute of Chicago, teaches at Elmhurst College, and is one of the foremost experts on the community mural movement.  He literally wrote the book on it.

Humboldt Park has been a predominantly Puerto Rican neighborhood since the 1950s.  In 1966, the Division Street riots were sparked when a Puerto Rican boy was shot by a Chicago police officer.  The riots led to the founding of a number of Puerto Rican rights organizations that began working to combat racism and injustice in Humboldt Park.  The woman in the burning building seems to be a reference to the arson that was widespread in the neighborhood at that time.

The logo at the top of the mural… 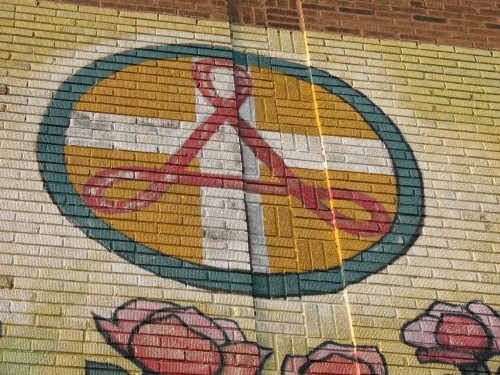 turns out to be the logo of the Latin American Defense Organization (LADO).  LADO no longer exists, but I learned that it was active in the 1960s and 1970s working on housing, education and health issues.  All of this history was new to me…I feel like an archaeologist unearthing Chicago’s history through its murals!

This piece is now 39 years old and is in remarkably good condition (it’s never been restored).  Sadly, the neighborhood is still very much in the grip of racism, injustice and poverty.  The kids with the roses seem a long way off.